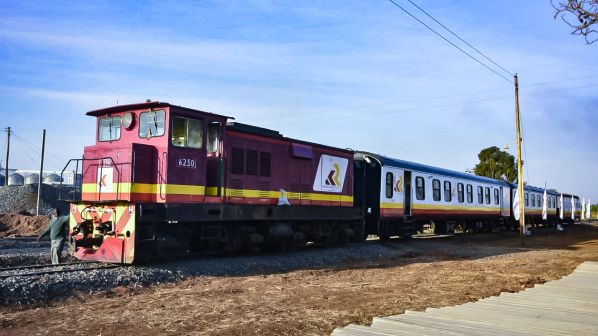 Relief for residents of Western Kenya as they are set to start enjoying Railway services this Friday(17/12/21)  after more than two decades.

At a cost of only Sh 600 for economy, travellers will be able to enjoy the 11 hours from Nairobi to Kisumu or vice versa.

In the train, those who prefer first class will have to pay Sh2,000 for the ticket and enjoy luxurious services like spacious closets for their luggage, refreshments, charging pots and Wi-Fi.

For passengers alighting in Nakuru from the capital will pay Sh300 which means one will save Sh100 as compared to the matatus which charge Sh400.

This will come as a breather for passengers who have been facing the high cost of travelling which currently has increased to the festive seasons.

In a statement, the Kenya Railway Corporation announced the train would depart Nairobi at 6:00 am.

It will arrive in Nakuru in five hours at 11:35 am and after which it would proceed to the Lakeside city and arrive at 5:45pm

President Uhuru Kenyatta is expected to flag it off.

Trips from Nairobi to Kisumu will start on Friday while travel from Kisumu to Nairobi commence on Sunday.

However, it is expected that Kenya Railways will release a detailed train schedule early next year.

With the new train resuming, passengers travelling from the lake side down to the coast will have an opportunity to connect in Nairobi.

The company has spent billions of shillings on refurbishing its century-old rail network to boost bulk cargo transportation and passenger travel.

The old line from Naivasha to Malaba has been operational but is in a bad condition, limiting cargo transportation.

The track from Nakuru, which goes through Njoro, Londiani, Kisumu and terminates at Butere, has not been in use.

The refurbishment of the Kisumu railway line is complete and works on the Malaba track are ongoing in the race to link the old railway track to SGR.

Kenya opened the Mombasa-Nairobi SGR line in 2017 and another new line to Naivasha in 2019.

It plans to link the old railway track to the SGR line in Naivasha for seamless cargo movements to the neighbouring countries.