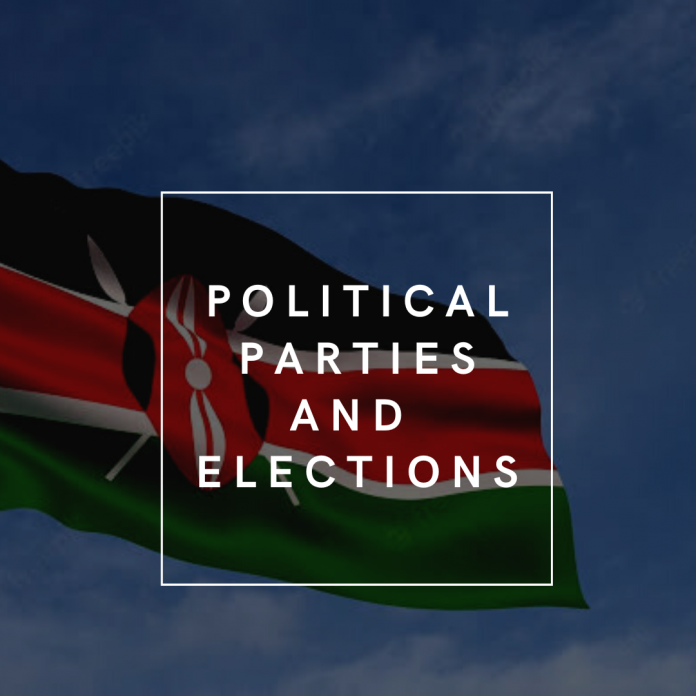 Election is a process through which individuals are voted for to assume particular roles or positions. This process should be fair and transparent for the general satisfaction of the election partisans.

In Kenya, Elections are held after every five years. This process allows the Citizens of Kenya to exercise their constitutional right to vote, to form political parties and participate in political activities. Elections are important because they give Citizens a chance to elect leaders to represent their ideas, needs and grievances in the legislature.

The first elections in Kenya were held in 1920, this was during the pre-colonial period and no African was represented in the Legislative council. The LegCo had only 11 Europeans, 1 Indian representative and 1 Arab representative. During this period, Africans were only allowed to engage in customary laws and not the election process.

This did not sit well with Kenyans then, they felt discriminated against and they decided to form their own political parties to present their grievances to the British Government. The African Union (KAU) was established in 1944, led by Mzee Jomo Kenyatta, to articulate Kenyan grievances against the colonial government, It was during this period that the Mau Mau uprising was also formed.

In 1952, The Kenya African Union (KAU) and other political parties were banned by the British government due to the Mau Mau rebellion and the leaders of the KAU party including Jomo Kenyatta were arrested and a state of emergency was declared from 1952 – 1960.

In 1957, was the first time that Africans were allowed to vote for eight representatives to represent them in the Legislative Council. Later on, in 1960, the ban for National political movements was lifted and James Gichuru and Tom Mboya merged their political parties to form Kenya African National Union (KANU). The Kenya African Democratic Union (KADU) was also formed the same year when the ban was lifted, to challenge KANU. KADU felt KANU was predominantly Kikuyu and Luo and did not cater for the needs of the minority tribes like the Kalenjin, Samburu and Maasai.

KANU wanted total independence and a New Constitution, while KADU was advocating for a majimbo System. The British Colonial government supported the federal system of KADU and this is how the eight provinces of Kenya were established.

In 1961, Jomo Kenyatta, was released and he became the first prime minister of Kenya in 1963 when Kenya got its independence. He Later became Kenya’s first President in 1964 when Kenya was declared a Republic. After independence, KANU removed all federal provisions from the constitution and this made KADU dissolve voluntarily in 1964 to join KANU.

In 1966, Jaramogi Oginga formed the Kenya People’s Party (KPU) that acted as a n opposition party but it was later banned and Jaramogi Odinga was detained. No new political parties have been formed since 1969. Sadly, in 1978, President, Jomo Kenyatta, died and he was succeeded by the Late President Daniel Arap Moi, on 8th August 1978. This was in accordance with the Old Constitution, which stated a president should be elected within 90 days, after the demise of the sitting president.

Moi’s ruling was met with a lot of opposition due to his dictatorial style of leadership and political parties to oppose his leadership had begun to form. Moi struck back at the opposition leaders through the law by introducing an amendment Act, number 7 of 1982 to parliament, which made the National Assembly amend the constitution, transforming the Country into a one-party state by introducing detention laws. This is how KANU became the only political party in Kenya for over 40 years.

In the 2002 General elections, Kenya elected its 3rd President, the Late Mwai Kibaki under the National Rainbow Coalition Party (NARC), this was the first time ever, having a president under a different political Party other than KANU.

By 2007 Kenya had over 160 registered political parties and it was during the 2007 General elections, that Kenya experienced the most traumatic post-election violence that left 1,333 dead and 650,00 people displaced. The violence started after the Electoral Commission of Kenya (ECK), declared The Late President Mwai Kibaki the winner of the 2007 Presidential elections. The violence was marked by tribal clashes and violence incitements by political leaders making it Kenya’s worst crisis since Independence. It took the intervention of UN former secretary General, Kofi Anan, to mediate between the two conflicting parties, which led to a power-sharing agreement. Kibaki was to remain President and Raila Odinga acquired a new post of the Prime Minister. This agreement was reached on 28th February 2008 and a coalition government was formed. The Electoral Commission of Kenya (ECK) was later disbanded and replaced with the current Independent Electoral commission of Kenya. (IEBC)

The 2013 general elections marked the first Elections under the New constitution 2010. The election was held on 4th March 2013, and electing President Uhuru Kenyatta as the 4th President of the Republic of Kenya. This also the first elections to be conducted by the Independent Electoral and Boundaries Commission (IEBC). In 2013, the elections were largely peaceful.

The 2017 Presidential elections were held again on 26th October 2017 following the Supremes’ court verdict. President Uhuru Kenyatta was again declared President by the Independent Electoral Commission and Boundaries (IEBC). This was met with a lot of rebellion by the opposition party supporters that led to violence and destruction of property. The violence did not last for long as the security was heightened and normalcy was restored.

The 2022 General Elections are a few days away, and from this brief history of elections and political parties in Kenya, it is time as Kenyans we appreciate our democratic right to vote and participate in the electoral process. It’s time we build our Nation through a change of leadership by exercising our voting rights. Let’s not burn our Nation to satisfy selfish interests of Politicians that lack Integrity.